Homily notes: Fr. Eoin McCrystal PP, Chaplain to the YCW in Ireland for the Feast of St. Joseph the Worker, Pro Cathedral, 1st May 2014. 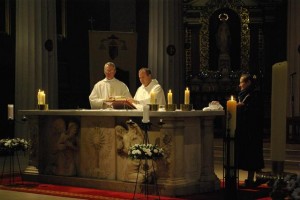 The Feast of St. Joseph the Worker was inaugurated by Pope Pius XII in 1955 in order to remind the Church that Joseph, the spouse of Mary, provided for the Holy Family by means of his trade as a carpenter and also to reflect the Church’s Social Teaching on the innate dignity of the worker and of work.  Some 60 years previous his predecessor Leo XIII wrote Rerum Novarum which for the first time outlined in a clear way the Church’s view of how the Industrial Revolution was treating workers and outlined the rights workers could expect from their employers. That body of writings has been added to by the Second Vatican Council and the popes right up to the present day.

Of course it is one thing to have the rights and dignity of workers outlined in documents and quite another to vindicate those rights in the workplace. Trade unions have played a vital role in educating workers of their rights and as advocates with Governments on these issues in Ireland so that legislation now offers many protections that workers of previous generations could only dream of. 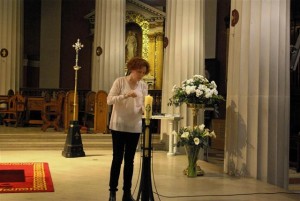 But each time brings its own challenges. Thankfully since we celebrated this Mass last year the number of people in employment in Ireland has increased. This is a tremendous achievement but we still have an unemployment rate of 11% which is a lot of people looking for gainful employment. 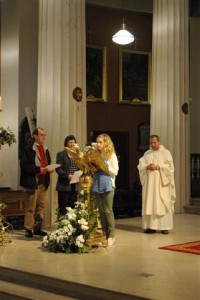 The first green shoots of economic recovery are beginning to show themselves which is wonderful news, considering where we have come from. There are some serious questions now for employers and workers to answer. Over the Easter break we saw a few Trade Unions have their annual conference and some more eloquently than others, have indicated that they are going to put in for wages increases with their employers. This is music to workers ears who since 2008 have heard nothing but the need for wage reductions or stagnation. But I wonder is this the right way to go? Should we put the fledging green shoots of recovery into our take home pay? 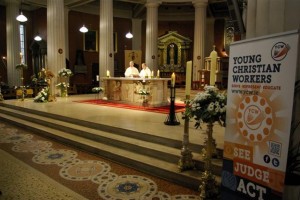 I’m sure some of you are saying, better my pocket that some of the fat cats out there! And in case you are thinking this is an academic question for me as a priest I would remind you that priests in Dublin have seen their annual stipend reduce by 20% over three years and that is from a low starting point! No, all of us can see how we could use a wage increase for the betterment of ourselves and our families. The reason I raise the question is because we still have an unemployment rate of 11%. There are many people who could be assisted back into the work force if that money was ploughed into subsidised job creation.

One of the catch cries of the Celtic Tiger period was “that a rising tide lifts all boats” and I was surprised not to hear those exact words being uttered in the demand for wage increases. The truth of the matter, as we all know, is that a rising tide cannot lift a boat if is tethered by a short rope. It is overcome by the tide and sinks to the bottom. We saw that happen many times during the boom and didn’t take note.  There is no doubt, the recovery will pose serious questions for all of us about how we wish to live as a society: do we want to be a  people looking out for the weak and vulnerable; or as people only looking out for ourselves and indifferent to the rest. 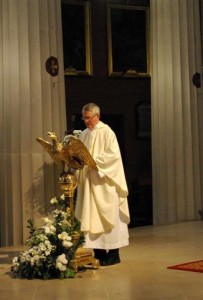 One event I thought would be a watershed moment for us as consumers was the Factory collapse in Bangladesh last year. At last year’s May Day Mass we feared the death toll would be a staggering 402 with 150 missing. Today we know the death toll was in actual fact 1,138 workers. You will remember that the workers noticed cracks in the 8 storey building on the Tuesday and raised concerns with management. They warned the workers to come into work as usual on the Wednesday despite their fears or there would be no job for them. That was the day the building collapsed. The garments made in that factory were all destined for western economies including our own here in Dublin through the Penney’s outlet. There was massive soul searching by people as they realised that the cheap bargain they enjoyed here was coming at a great cost to someone the other side of the world. A multi-million dollar compensation fund set up by western retailers to assist the families of the deceased and survivors has not been dispersed yet despite the deadline being passed. So the injustice continues.

I had hoped that a new attitude towards ridiculous cheap prices on goods would lead to more ethical shopping. But that is not the case generally. The retailers have made the same judgement because if the market forces suggested that that is the way they should go, then a symbol would have been created to clearly show all consumers that this product has been ethically produced. 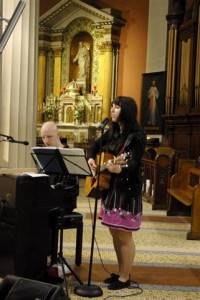 But we don’t have to go abroad to see products sold ridiculously cheaply. At Christmas we saw Irish grown vegetables being sold for 6 cents a packet; you would not get even a packet of seeds for that price!

Pope Francis has renewed the call of the Church to make the dignity of the human person the central focus of national and global economies. His Apostolic Exhortation of November 2013 comments on economies in which ‘masses of people find themselves excluded and marginalized’ and criticises free market competition, which has left many without work, without opportunity and on the fringes of society. We as Irish workers have many hard questions to face in the coming years and we need to realise that words like “solidarity” and “the common good” do come at a personal price. The question is, are we willing to pay it?

Share:
Warning: stristr() expects parameter 1 to be string, array given in /home/customer/www/ycw.ie/public_html/wp-content/plugins/custom-facebook-feed/inc/CFF_Utils.php on line 506
Please enter the Page ID of the Facebook feed you'd like to display. You can do this in either the Custom Facebook Feed plugin settings or in the shortcode itself. For example, [custom-facebook-feed id=YOUR_PAGE_ID_HERE].